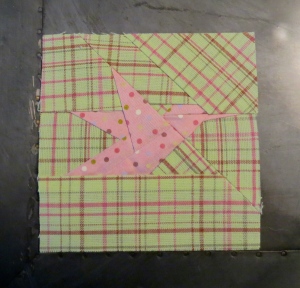 This block is dedicated to my old neighbor Celeste. We are going to call her Celeste X. because I honestly cannot remember her last name. Celeste was one of the first neighbors we met in our neighborhood an she was by far the most colorful. Celeste had 4 dogs and 3 cats in addition to the feral cat she fed in the neighborhood. Let me tell you, the other neighbors were not 100% pleased about the feral cat feeding. But Celeste had a love for animals that was unmatched, I believe she even convinced my husband to feed that cat when she was out of town. She had a rescued Rottweiler that she routinely walked in the wee hours of the morning because she new that he would scare the neighbors because he wasn’t quite right…

Here is your story for tonight (as told by Celeste – 14 years ago so take it with a grain of salt or several):

The gentleman we bought our first house from had a cat. Several years after his wife died he met a nice neighbor lady and they fell in love and got married. This neighbor did not like cats, maybe she was allergic, I don’t know… Anywho… He moved in with her but left the cat at his house a few doors down. Celeste would take care of the cat when he was out of town, she played with it, bought it toys, loved on it. She started noticing the cat was sad and she felt this was due to a lack of interaction being all alone in that house. She said the cat lost it’s personality entirely. So one day, Celeste went over there, got the cat and all of its toys and took it home with her and left him a note that basically said it was her cat now.

Eventually he sold the house, we bought it, and more than once we had to shoo that cat out of our house. You see, Celeste’s front door was right across from ours. So during the day the cat sat on our porch and lived in our yard and at night he went home to Celeste.

She eventually bought some land and took all her animals out to the country. What about the feral cat? She trapped that sucker and took it too.

Thoughts on this block:

No more large scale directionals for the background. UHG (you will see one more ugly one like this) 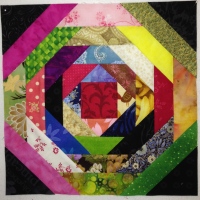